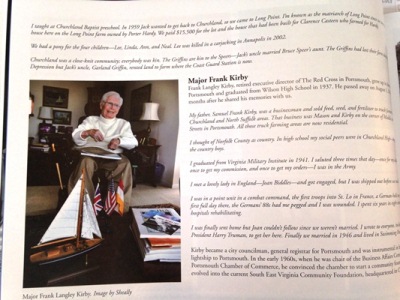 In the fall of 2013, SEVACF funded a grant request made by the Suffolk River Heritage, Inc. to assist in the production of their third publication, Truckin’ on the Western Branch, a cultural history of Churchland, West Norfolk, Western Branch, and Bowers Hill. The book, which was included as part of the Suffolk River Heritage’s grant outcome report earlier this year, compiles the recollections of over 100 people to tell “the story of how a thriving region of truck farmers grew into a diverse, suburban community while retaining some of its village culture and closeness.”

Shortly before passing away in August 2014, Mr. Kirby shared his memories with the book’s writers about what it was like to have grown up in downtown Portsmouth and to have attended Wilson High School. He expressed that it was a great relief to have been “finally sent home” after serving orders in the Army, and to settle down with his wife, Joan, in Swimming Point. He went on to become a city councilman, general registrar for Portsmouth, chair of the Business Affairs Committee of the Portsmouth Chamber of Commerce, and finally founder of the Portsmouth Community Trust.

Ward Robinett and his wife, Bruce, met at Churchland High School after Ward’s father, Dr. Paul Ward Robinett, moved his family to the area and opened his practice on Court Street in Portsmouth. In speaking with the writers, the two reminisced about high school dances, teachers, and watching their neighborhoods grow. Ward was one of “about 10 out of 30” students that he graduated with to stay in Churchland after he and Bruce married. In the following years, he forged a career at TowneBank, from which he recently retired before becoming CEO of SEVACF last year.

Also featured in Truckin’ on the Western Branch are current Board Secretary, Richard Wentz, past Board members, Nancy Wren and Don Comer, current fund advisors, Brad Cherry and Robert Williams, and many more. Visit http://www.suffolk-river-heritage.org/Truckin_book.htm to learn more about the book and to purchase your copy!