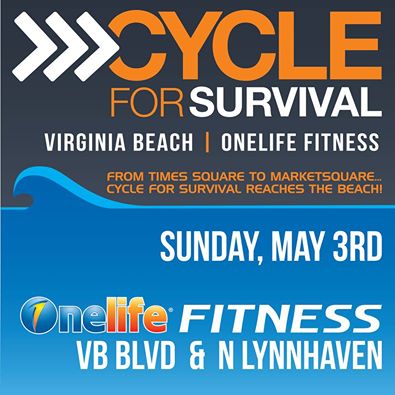 On May 3, 2015 Southeast Virginia residents will gather at One Life Fitness in Virginia Beach to raise money for the Memorial Sloan Kettering Cancer Center to conduct rare cancer research.

How? By riding stationary bikes.

Part of a national movement, Cycle for Survival Virginia Beach challenges teams of up to eight people to take turns riding stationary bikes for a period of four hours. Each team is given one stationary bike and a fundraising goal of at least $1,000. While they ride, their friends and family can make donations to the team’s fundraising page, all proceeds of which will ultimately go to the Memorial Sloan Kettering Cancer Center.

The local event was initiated by Rosemary Wilson and Anthony Nero, both of whom have tragically lost their spouses to battles with cancer. They began the Virginia Beach chapter as a way to get our community involved in contributing to lifesaving cancer research.

“I ride to honor brave family and friends touched by cancer,” Rosemary shares on her team’s fundraising page. “Cycle for Survival is my way of fighting back and making a difference.”

When she approached SEVACF and asked us to sponsor Cycle for Survival Virginia Beach, we were thrilled at the opportunity to help such a noble cause.

As part of our sponsorship, we will be opening a Cycle for Survival Virginia Beach Special Project Fund at the Foundation. All money contributed to the fund will be used to pay for the costs of this spring’s event. To learn more and to register, visit http://cycleforsurvivalvb.org.